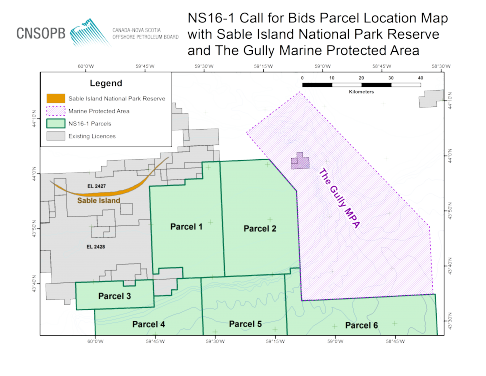 EAs in the Nova Scotia offshore area are governed by the Federal/Provincial Accord Acts and the Canadian Environmental Assessment Act, 2012 (CEAA 2012). Part III of the Accord Acts promotes environmental protection. The Accord Act EA process is applicable to  geophysical and geotechnical  programs, including seismic programs. CEAA 2012 applies to “Designated Projects” as defined by that Act, namely exploration drilling programs, development programs and some decommissioning programs.

Strategic Environmental Assessments (SEAs) which include assessment of these parcel areas  were completed by the Board in October, 2012. The parcels are adjacent to, or in close proximity to, a Marine Protected Area and critical habitat for species at risk. The parcels include areas used by a range of commercial and Aboriginal fisheries. It is recommended that the information within these SEAs be used by operators to assist in the preparation of project specific environmental assessments. Applicable SEAs include:

Parcels 2, 5 and 6 are located adjacent to the Gully Marine Protected Area (MPA). The Gully MPA contains critical habitat of the Northern Bottlenose Whale (Scotian Shelf population), listed as Schedule 1 Endangered under the Species at Risk Act (SARA). The Gully MPA is  home to sensitive benthic species and has its own protections under the Gully Marine Protected Area Regulations. Bidders are strongly encouraged to become familiar with these regulations, which are enforced by DFO. The Regulations are available by clicking here:  http://laws.justice.gc.ca/eng/regulations/SOR-2004-112/.

Portions of all of the parcels are known to have year-round and migratory presence of several species with protections under the SARA. These species include Northern Bottlenose Whale, Sowerby’s Beaked Whale, Blue Whale and North Atlantic Right Whale. As noted above, Parcels 2, 5 and 6 are located adjacent to the critical habitat of the Northern Bottlenose Whale (Scotian Shelf population). Any approved activity with an increased likelihood of interaction with this species or its critical habitat may require enhanced mitigation and may include certain limitations. Project specific EAs will be required to address this increased potential for interaction. Bidders are also strongly encouraged to gain an understanding of the Species at Risk Act (SARA), which is enforced by DFO and Environment and Climate Change Canada. The Act is available by clicking here: http://laws-lois.justice.gc.ca/eng/acts/S-15.3/index.html.

The mitigation measures contained in this Statement were developed based on available scientific knowledge and are considered to be current best practice for minimizing potential adverse impacts of seismic activities that use air source arrays. The statement is taken into account during the environmental assessment processes. Operators of seismic operations will be required to provide rationale for any modifications or variations to the mitigation measures that are set out in the Statement for consideration by the CNSOPB. The Statement and a background paper are available by clicking here: http://www.dfo-mpo.gc.ca/oceans/management-gestion/integratedmanagement-gestionintegree/seismic-sismique/index-eng.asp.

As noted above, any approved activity near the Gully MPA/critical habitat areas or with an increased likelihood of interaction with species at risk may require enhanced mitigation above and beyond the Statement.

Parcels 1 and 2 are located adjacent to Sable Island, and all parcels are within the vicinity of Sable Island. Sable Island is a federally protected National Park Reserve as well as a nesting area for bird species at risk, including the Roseate Tern which is listed as Schedule 1 endangered on SARA. All  parcels are located beyond the drilling exclusion zone of 1 nautical mile seaward of the low water mark of Sable Island.