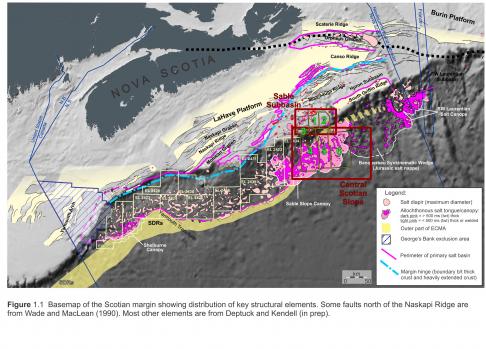 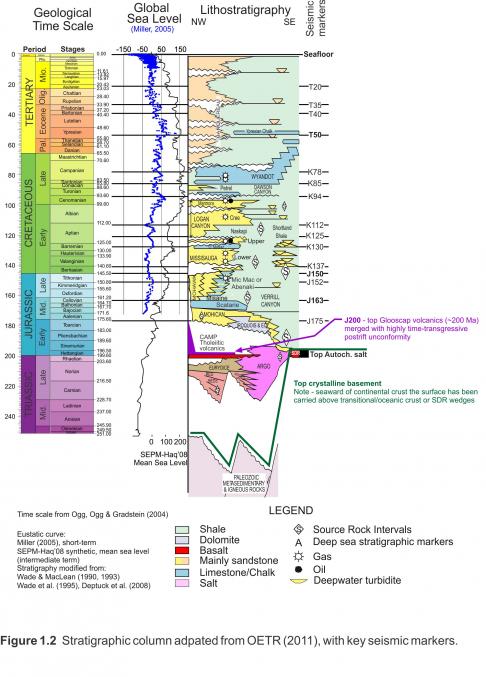 The NS16-1 Call for Bids includes six parcels over the Sable Subbasin and central Scotian Slope, two of which were nominated by industry (Figure 1.1).  Parcels 1, 2, and 3, are located on the shelf, outboard of Sable Island.  Parcels 4, 5, and 6 are south of Parcels 1-3 on the outer shelf and upper slope of the central Scotian margin.

Parcel 2 is in an area that has received limited exploration attention over the last 35 years, with no exploration wells or 3D seismic over the Parcel. Most of the existing 2D seismic dates from the early 1980s. Thick Cretaceous and Jurassic sediments of the Sable Delta complex were heavily faulted over this area as the delta prograded seaward and the Sable Subbasin subsided. These faults provide a potential trapping mechanism that requires new seismic to be fully evaluated.

Parcels 4, 5 and 6 lie outboard of the Sable Subbasin on the Scotian Slope. The water depths across these 3 parcels range from 150 - 4000 meters. There have been 2 wells drilled to date in these parcels, one of which encountered significant quantities of gas. The Annapolis G-24 well is within Parcel 4 and was drilled by Marathon in 2001, this well encountered a total of 27 meters of net gas pay. The main exploration targets within these parcels are believed to be deep water turbidite deposits in the Cretaceous interval. Recent internal studies by the CNSOPB’s resource assessment team have identified numerous shelf margin canyon systems throughout the Cretaceous that erode sand prone systems on the shelf and potentially delivered reservoir quality sands to this region. This implies that the risk of encountering reservoir quality sands is low to moderate within these parcels.

This Call for Bids website is divided into two main sections. For details regarding parcels 1, 2 and 3 refer to the Sable Subbasin section, and see the Central Scotian Slope section for information specific to parcels 4, 5 and 6.