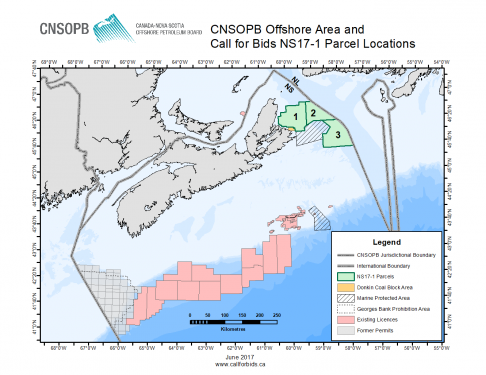 Call for Bids NS17-1 consists of three (3) Board-posted parcels within the Sydney Basin in water depths ranging from 50-450 metres (Figure 1.1 - Overview map). The Sydney Basin is a Carboniferous age sedimentary basin extending from Cape Breton Island to southern Newfoundland. This basin crosses the jurisdictional boundary between the Nova Scotia and Newfoundland and Labrador Offshore Areas. The last Exploration Licences in this region, within the Canada-Nova Scotia Offshore Area, were acquired by Hunt Oil in 1998 and relinquished in 2010 without drilling a well however, seismic data was acquired. Husky Canada recently held an Exploration Licence directly adjacent to the proposed NS17-1 parcels in the Canada-Newfoundland and Labrador Offshore Petroleum Board’s jurisdiction. Husky Canada acquired seismic data but no wells were drilled, and the Exploration Licence was relinquished in 2014.

Only two wells have been drilled in the offshore portion of the Sydney Basin, North Sydney F-24 and North Sydney P-05. Both were drilled in the mid-1970’s to evaluate shallow targets well above the Early Mississippian Horton Group, which is interpreted to be the most prospective interval in the basin. Both wells encountered gas in shallow Pennsylvanian sandstone formations above the Horton. North Sydney F-24 was flow tested but was unable to flow gas to surface.

The geophysical data in the Sydney Basin consists of widely spaced two-dimensional seismic lines that were predominantly collected in the 1980’s or earlier, and apart from one recent survey have poor image quality. Interpretation of this data shows that this basin has all the necessary elements to be prospective, particularly the Horton Group, which has not been penetrated by any of the Sydney Basin wells. The region has potential for both oil and gas, and active oil seeps, from equivalent formations, are present onshore Cape Breton. The primary target formations in the Sydney Basin are analogous to the producing zones in the Stoney Creek oil field and McCully gas field onshore New Brunswick.