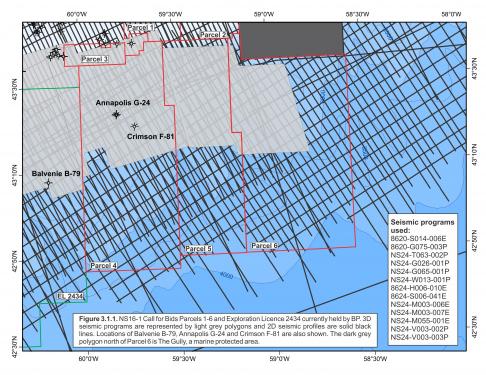 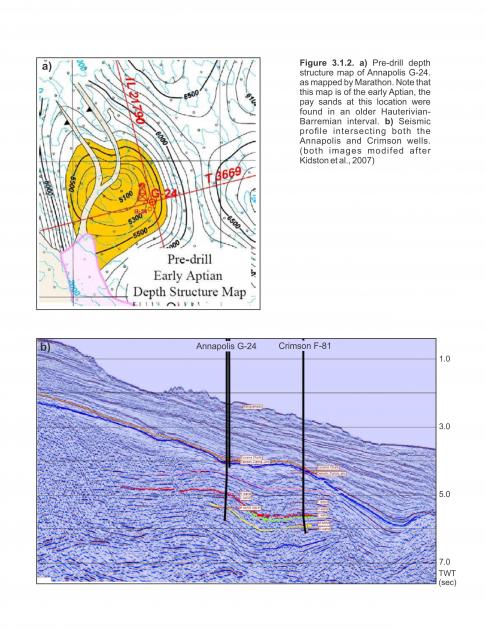 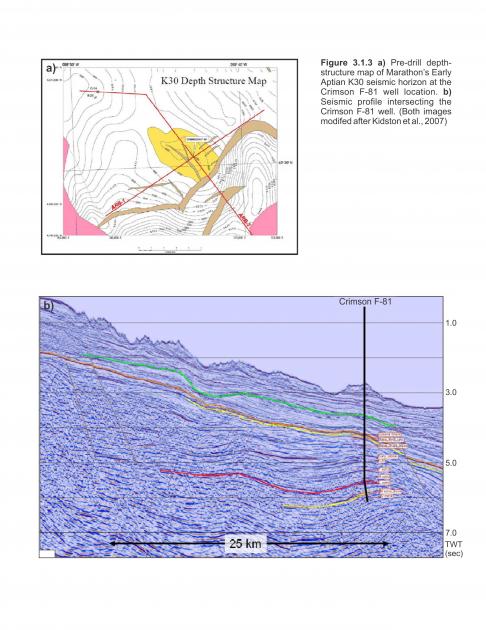 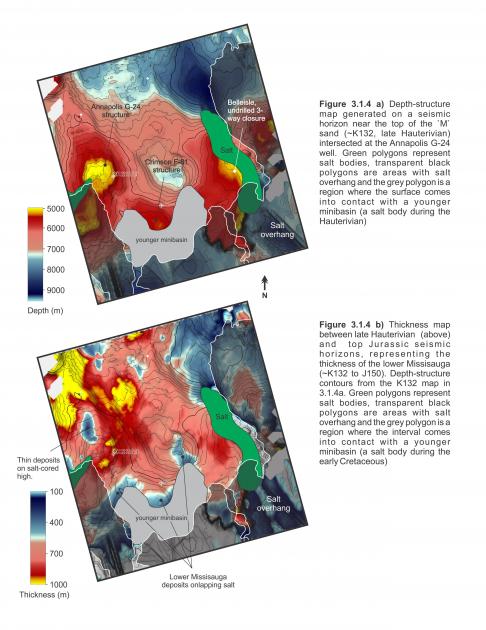 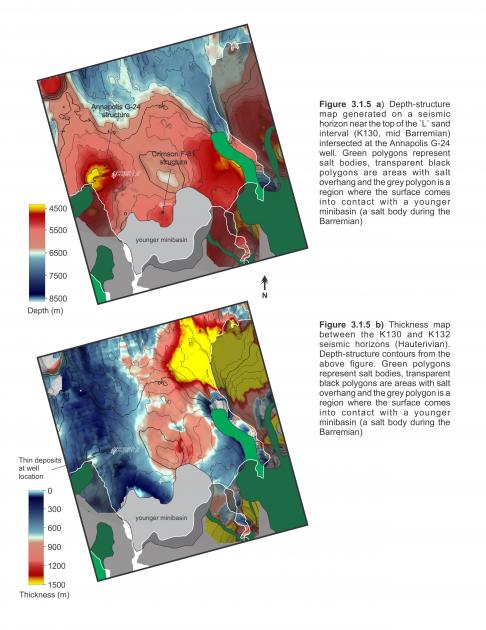 The central Scotian Slope has very good 3D and 2D seismic coverage with the most recent and highest quality surveys collected during the late 1990s and early 2000s (Figure 3.1.1).   The upper slope portions of NS-16-1 Parcels 4, 5 and 6 have contiguous coverage of good quality 3D data, and a regular spaced grid of various regional 2D seismic surveys is available along the entire mid-lower slope. The only seismic data available beyond 3000m water depth are 2D surveys.

Three wells have been drilled within the study area: Balvenie B-79, Annapolis G-24 and Crimson F-81 (Figure 3.1.1). Balvenie was drilled by Imperial in 2003, with a primary reservoir objective at the Albian level where several amplitude anomalies exhibiting modest AVO response were observed (Kidston et al., 2007). The Balvenie well reached total depth in the Albian target interval within which several thin, tight, gas-charged siltstones were encountered. These siltstones ranged from 1–8m thick and produced considerable mud-gas shows during drilling. The Balvenie B-79 well is within EL 2434 currently held by BP (Figure 3.1.1).

The Annapolis G-24 well in Parcel 4 was drilled by Marathon in 2001 to a TD of 6182m MD in the lower Missisauga Formation equivalent section (latest Valanginian) with a pre-drill target interval in early Aptian strata. The prospect’s early Albian depth-structure map and dip seismic profiles are shown in Figures 3.1.2a and 3.1.2b respectively. Reservoir zones were not encountered in the Aptian target interval but three gas-bearing zones were discovered in Barremian strata from 4842–5528m MD. These zones were designated by the operator as the H, L and M Sands (Marathon 2002) though the H and L “sands” are not individual sands per se but gross intervals of interbedded sands, siltstones and shales (Kidston et al., 2007).

The H Sand extends from 4842–4866m MD and is Mid-Barremian age (upper Missisauga equivalent) (Marathon, 2002). It consists mostly of interbedded shales, silts and minor sands. There is a cumulative total of 3.8m net pay across the entire interval summed from a number of very thin sands less than 1m thick.

The Late Hauterivian M Sand is the main reservoir zone within the Missisauga Formation equivalent (Marathon, 2002). It consists of two sands with fair to very good porosity and a total of 18.2m of net gas pay. These sands have a porosity range of 12–25% and fair to very good permeability (Kidston et al., 2007).

Marathon’s Crimson F-81 well was a follow-up to Annapolis G-24 gas discovery and located about nine kilometers to the southeast of G-24 (Figure 3.1.1). It was spudded in 2004 and drilled in 2091.5m of water. The pre-drill structure map and corresponding seismic line are shown in Figures 3.1.3a and 3.1.3b with the target described as a faulted anticlinal feature developed during the Late Cretaceous as a result of salt withdrawal (Kidston et al., 2007). The Crimson reservoir objectives were Early Cretaceous deep water sands deposited seaward of the sand-rich Sable paleodelta, where a thicker, more sand-prone reservoir was anticipated down-slope from the Annapolis well and associated turbidite fan system.

Crimson F-81 was drilled to a TD of 6676m MD within the Missisauga equivalent section of Early Hauterivian to latest Valanginian age. No significant hydrocarbon-bearing zones were encountered. Reservoir quality was generally much poorer than Annapolis consisting of several thin, tight, very fine to fine-grained sandstones and siltstones in a shale-dominated succession (Kidston et al., 2007). One reservoir quality sand was discovered at 6414m MD in the Late Hauterivian upper Missisauga equivalent. The O Sand is 13m thick and composed of fine-grained calcareous sandstone with an average porosity of 13% (maximum porosity 15%).

Balvenie, Annapolis, and Crimson are located directly downslope from a Late Jurassic to Early Cretaceous sand-prone deltaic system, and reservoir-quality, gas-bearing coarse siliciclastics are proven in the Annapolis well. Recent seismic mapping near Annapolis and Crimson indicates that while this region is in a prime location for turbidite deposits, rapidly evolving paleo-bathymetry related to salt tectonics prevented thick turbidite reservoirs from accumulating at these well locations.

For example, Figure 3.1.4a is a depth-structure map near the top of the M Sand interval (Late Hauterivian). The gas-charged Annapolis structure is the prominent simple closure on the western edge of the diagram, whereas the Crimson structure,   located southeast of Annapolis, is a three-way closure against a younger minibasin and associated secondary salt weld. An isopach map between the top M Sand (K132) and top Jurassic (J152) horizons indicates the lower Missisauga equivalent section in places is more than 1 km thick (Figure 3.1.4b).  Neither well fully penetrated this interval and neither well targeted the thickest part of the isopach.  The interval thins to less than 300 m thick in two regions: northwest of Annapolis, above the salt-cored high that forms the main Annapolis structure, and south of Crimson where the interval onlaps a salt body. The thickest lower Missisauga deposits appear to divert around the Annapolis structure, continuing towards gaps in salt feeders to the east of Crimson and/or southwest of Annapolis.  The best developed turbidite reservoirs in Annapolis (18.2m of net gas pay in the M sands) and Crimson (13m thick O sand) were encountered in this interval, and additional reservoir may be present in the deeper unpenetrated parts of this isopach.

The depth-structure map at the top of Annapolis’ Mid-Barremian L Sand interval displays a very similar trend of structural highs as revealed in the Late Hauterivian M Sand map. This is expected as these intervals are only separated by about 550m of strata (Figure 3.1.5a). The thickness map of the interval between these sands however, is drastically different with a prominent thin trending north-south through the Annapolis and Crimson wells (Figure 3.1.5b). The thickest parts of this Barremian interval lie to the northeast where thicknesses reach 1.5km, whereas Annapolis and Crimson penetrate it where it is only about 400m thick. Annapolis’ L Sand is found within this thinner section with 5.3m of net pay over a 57.3m gross interval. That reservoirs and gas-pay were encountered in this thinner interval is encouraging, and together with the thicker gas-bearing M Sands within the K132 to J152 interval suggest that targeting expanded depositional sections should improve the possibility of encountering thicker reservoir quality turbidites.