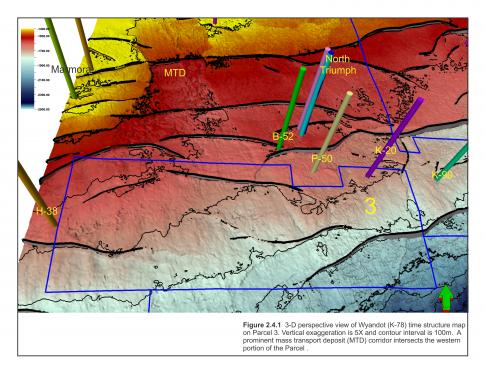 Parcel 3 is located near the outer edge of the present day Scotian Shelf.  It is surrounded by numerous gas discoveries including the Sable Energy Project’s (SOEP) North Triumph field which is currently on production (Figure 2.4.1). The North Triumph Production Platform lies six km to the north of Parcel 3 and has produced 280.3 BCF of gas to the end of February 2016 with production beginning in 2000 (Figure 2.4.1). Three Significant Discovery Licences found along the north border of Parcel 3, held by ExxonMobil Canada Properties since 1990, are remnants of the original North Triumph Significant Discovery Licences after the Production Licence was created.

The Glenelg J-48 Significant Discovery Licence bordering the west side of Parcel 3 has been held by ExxonMobil Canada Properties since 1990. It has a mean OGIP of 700 BCF found within sandstones of the upper Missisauga (Barremian) and Logan Canyon (Albian) Formations (Smith et al., 2014).

The Chebucto K-90 Significant Discovery is composed of two licences, with the north licence owned by Shell Canada Limited and the south licence owned by ExxonMobil Canada Properties.  The Chebucto field has a mean OGIP of 1.0 TCF found within strata of the Early Cretaceous (Albian) Cree member of the Logan Canyon Formation, and at the top of the Missisauga Formation (Aptian) (Smith et al., 2014).

The Triumph P-50, well drilled in 1971 by Shell, lies just to the north of Parcel 3 and penetrated a number of well-developed Barremian aged Missisauga Formation fluvial and shallow marine sandstones with good to excellent porosities but were mostly wet.  The well drilled through a fault and into the footwall of the North Triumph structure, with the result that the main targets (Upper and Lower members of the Missisauga formation) in the hanging wall were not tested.

The Husky-Bow Valley West Chebucto K-20 well (1984) is the only well drilled within the parcel. The well penetrated a 2000 m thick Logan Canyon Formation that contained a far greater amount of sand than the K-90 well.  These sands, ranging from 5-20 m thick, were mostly fine to very fine grained, variably porous (tight to very good porosity) and represented deposition in a shallow marine setting along with associated shales and siltstones.  The basal 100 m of the Cree Member was composed of a near continuous marine sandstone succession with fair to very good porosity and a number of intervals with staining and strong fluorescence but no associated elevated mud-gas readings.  While thick good quality Missisauga sands were also penetrated, only one was gas bearing (Table 2.8).  Sand 1 was subsequently tested and flowed gas at 4.13 MMscf/d with some depletion noted in the test analysis report. More details on this well can be found in the well history section.

Parcel 3 is covered by portions of three 3D seismic surveys and numerous early 1980s 2D surveys. The parcel’s bathymetry is generally flat-lying with a shallow dip to the southeast. Water depths range from 50 to 200 m, with depths increasing to 400 m in a small part of the parcel’s southeast corner.

A similar parcel was awarded to 1164214 Alberta Ltd in the NS08-1 Call for Bids for $7,871,173.60 under a “promote licence” agreement where the 25% work deposit was deferred for three years.  The parcel returned to Crown with no deposit being paid.