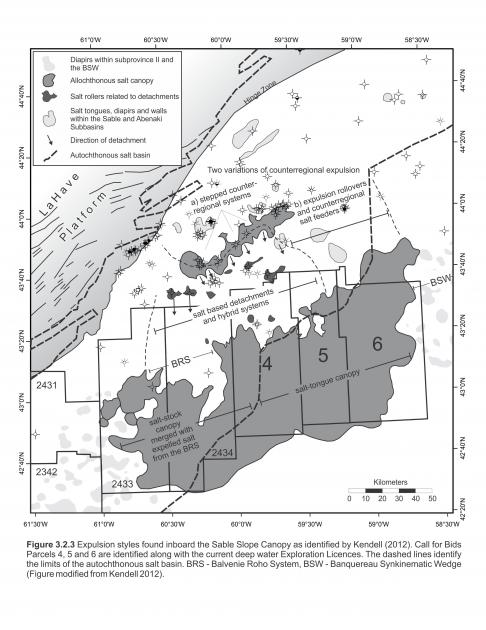 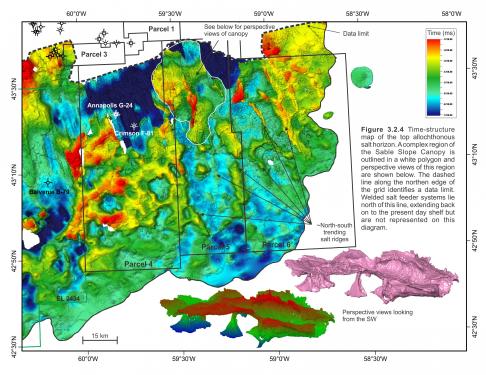 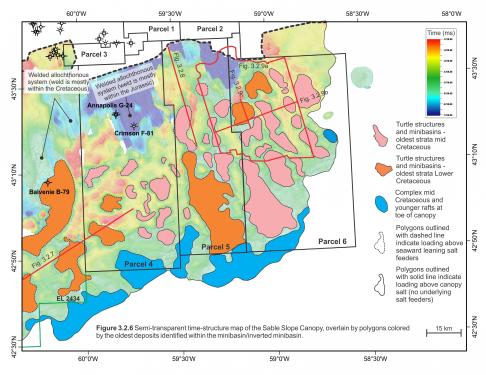 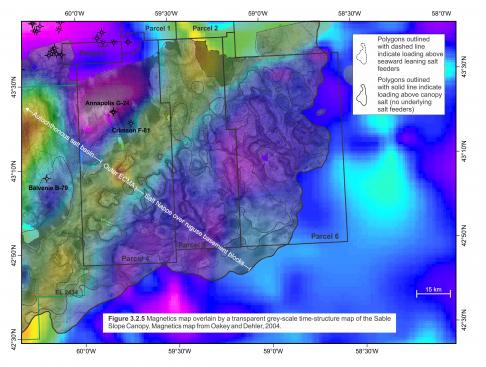 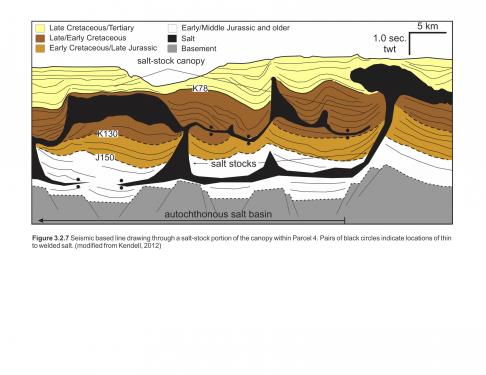 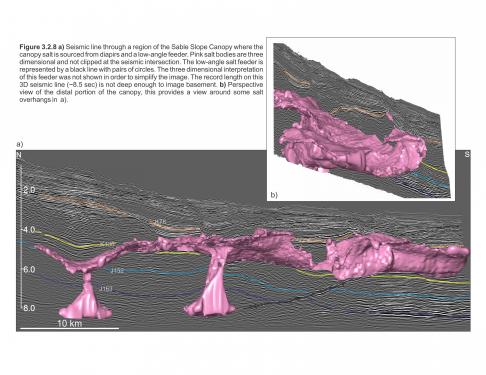 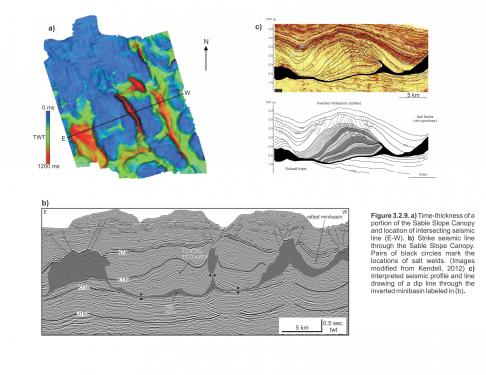 There are two canopy systems within the central Scotian Margin; the Sable Shelf Canopy (“Shelf Canopy”) and the Sable Slope Canopy (“Slope Canopy”) (Kendell, 2012). Although they are approximately 50 kilometers apart, they are linked in multiple locations by welded detachment systems. Extensional systems detaching in the Shelf Canopy expelled salt downdip supplying varying amounts of salt to the Slope Canopy (Kendell, 2012). Unravelling the complex salt tectonic history responsible for forming these canopy systems is crucial for generating accurate structure and thickness maps and is critical when considering the local petroleum systems. Figure 3.2.3 shows the location of the NS16-1 parcels relative to these canopy systems. Parcels 1 and 2 are located above the Shelf Canopy. Parcels 4, 5 and 6 are located principally above the Slope Canopy, and are bounded to the west and east by two very distinct, salt-related detachment systems. West of Parcel 4 is the Balvenie Roho System (BRS) (Deptuck et al., 2009). Named after the well drilled on a related structural high, this large salt-based detachment system was sourced by underlying salt feeders near the end of the Jurassic, with its detachment surface in Lower Cretaceous strata. BP’s Exploration Licence 2434 overlies this detachment system. East of Parcel 6 is an older salt-based detachment system, the Banquereau Synkinematic Wedge (BSW) (Ings et al., 2006). The BSW differs from the BRS in that a) it is an older detachment system (Middle to Late Jurassic), and b) there are no underlying feeders. Instead, the system formed above one large allochthonous tongue or nappe expelled from the shelf region, rather than above an amalgamated salt stock canopy supplied by numerous feeders on the slope (Deptuck et al. 2014).  Mapping efforts in this study are generally limited to the area between these two regional-scale features.

Parcels 4, 5 and 6 are located across the Sable Slope Canopy (Figure 3.2.4). This large canopy system covers approximately 12 700km2 with regions where the allochthonous salt is as thick as 3500m. Kendell (2012) described a variety of salt expulsion systems in the landward parts of these parcels, ranging from amalgamated salt stocks, counter-regional systems, rohos and hybrid features (Figure 3.2.3). The northern parts of Parcels 4, 5, and 6 overlie the autochthonous salt basin where salt is largely welded out.  A time-structure map above the salt indicates the top of salt here is stratigraphically deeper than anywhere else in the study area (Figures 3.2.4 and 3.2.6).  A number of primary feeders (salt stocks) supplied salt to the early canopy system, and later reactivation of these feeders took place as younger deep minibasins were deposited, expelling salt from the primary stocks (identified with dashed outlines in Figures 3.2.5 and 3.2.6). These minibasins are only found within Parcels 4 and 5 (Figure 3.2.6) where the salt stocks are rooted to the autochthonous basin (Figure 3.2.7).  Similar basins may exist landward of Parcel 6. Most of these salt stock-loading basins are located either above or north of the ECMA. In map view, some basins are located slightly seaward of the ECMA but this is because they loaded seaward leaning salt feeders extending from the primary salt basin.

One of the most complex regions of salt-related deformation is found in the northern part of Parcel 5, above the autochthonous salt basin where a potential branch of the outer ECMA turns sharply to the north (Figures 3.2.4, 3.2.5).  Here, a salt-stock canopy has been identified where it is unclear whether salt stocks are rooted to a Lower Jurassic allochthonous system or to the primary salt layer (Figures 3.2.4, inset). Differentiating between the regional allochthonous welded systems in this area and the true autochthonous level is further complicated by poor imaging at depth and shallow record lengths of 3D seismic volumes.  Nevertheless, several salt stocks appear to have amalgamated in this region, and as such it is analogous to the amalgamated Balvenie salt-stock canopy further west (Figure 3.2.8).

In contrast, most of the Slope Canopy is located outboard the autochthonous salt basin south of the ECMA, above interpreted oceanic crust. The Slope Canopy lies within much younger stratigraphic intervals, ranging from Cretaceous to Tertiary (Figure 3.2.5). Salt tectonism associated with the canopy system is relatively simple and better imaged compared to the inboard systems. Salt withdrawal minibasins, extensional turtle structures and rafts are commonly identified throughout the canopy. Basins loading canopy salt (with no underlying salt stocks) are abundant throughout Parcels 4, 5 and 6 (colour coded in Figure 3.2.6 according to the age of the oldest strata within them), with the majority located in what are considered to be extensional or detachment corridors. These corridors are most evident on the top salt time-structure map in Parcels 5 and 6 where they are flanked by adjacent salt highs (Figure 3.2.4). The salt highs appear to have formed during sediment loading above canopy salt, in some cases as the basins were translated downdip and locally inverted into turtles or half turtles. Figure 3.2.9(c) illustrates an example of an inverted basin interpreted to contain Lower Missisauga equivalent strata displaced along a corridor in Parcel 6. The seaward toe of the Slope Canopy system also appears to be veneered by a complex arrangement of rafts and rotated blocks containing mid-Cretaceous strata, where the canopy salt also tends to be thinner (Figure 3.2.6).