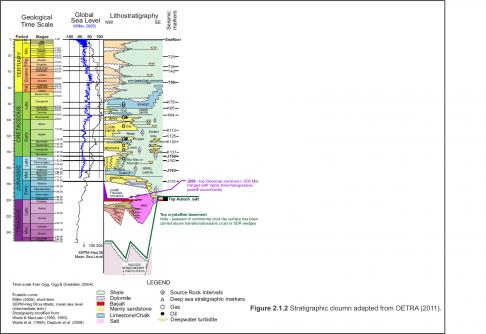 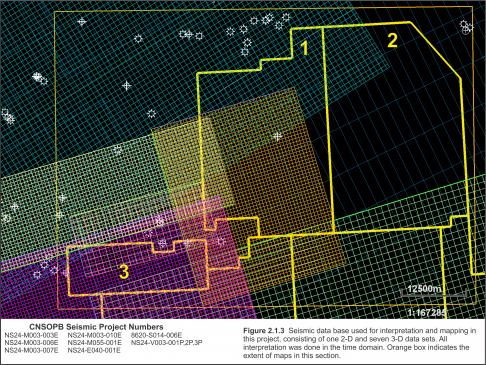 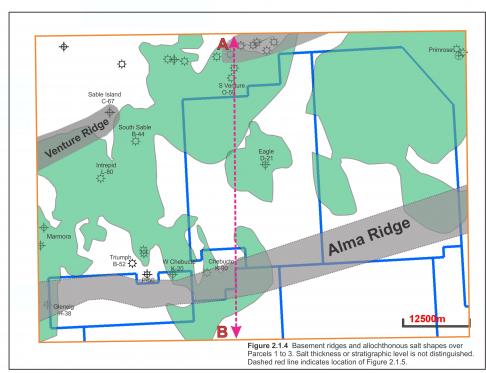 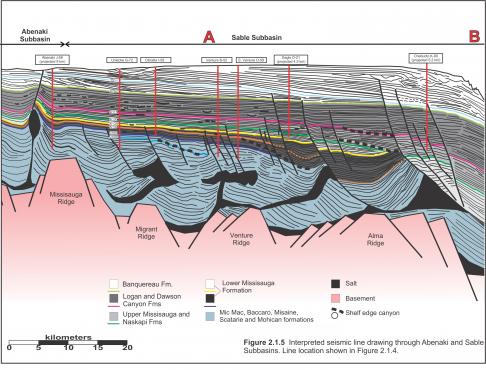 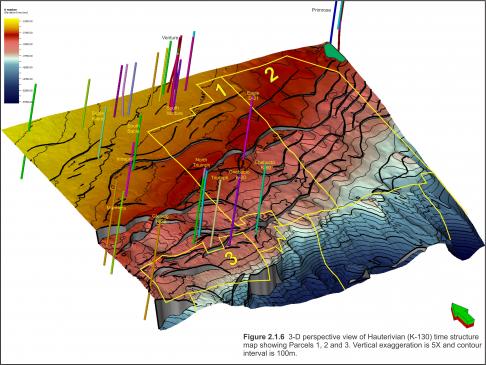 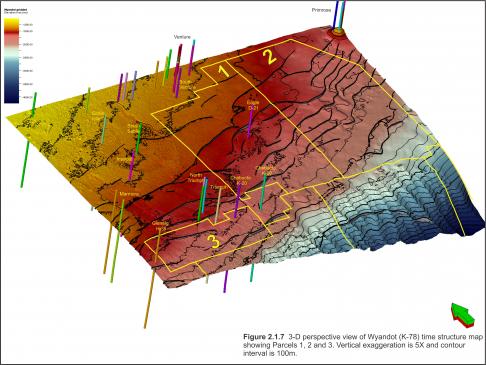 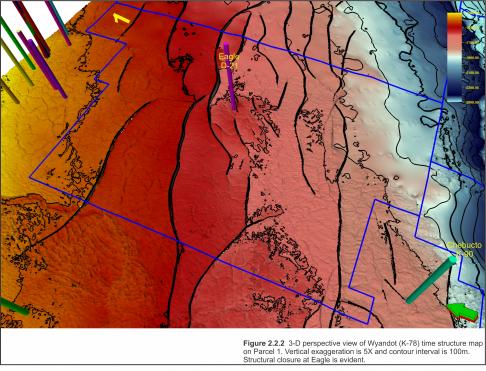 Parcels 1, 2, and 3 are located in the Sable Subbasin where most of the Significant Discoveries in offshore Nova Scotia have been made (Figure 2.1.1). The CNSOPB has produced several detailed geological studies within the Sable Subbasin in recent Calls for Bids (CNSOPB, 2012, 2013). The following brief, regional geological summary includes information and updates from these reports. The CNSOPB has adopted the seismic horizon nomenclature proposed in OETRA (2011) Play Fairway Analysis. The Scotian Basin stratigraphic column indicates the key mapped horizons in this section (Figure 2.1.2). The digital seismic database used for interpretation and mapping in this study included one 2D and seven 3D data sets (Figure 2.1.3). The CNSOPB program numbers for these programs are also listed on this figure.

Salt mobilization played a role in forming the structures on all three parcels. Argo Formation synrift salt deposition on the Scotian Margin during the latest Triassic to earliest Jurassic is interpreted to be bounded by the basement highs which then influenced the expulsion of allochthonous salt bodies. Sediment loading and down-building by Early Jurassic fluvial and shallow marine systems loaded this salt which was commonly pinned in the basinward direction by basement ridges (Figure 2.1.4). Salt contact with these basement horsts forced salt to climb vertically through the sedimentary section eventually forming either solitary salt diapirs or canopies. Allochthonous salt bodies vary in thickness from the large diapir under the Eagle structure to thin salt sheets under the northern portions of Parcels 1 and 2.  The salt shapes drawn on this figure do not indicate salt thickness or position within the section.

A cross section drawn from seismic data extends from the Abenaki Subbbasin to the present day shelf break (Figure 2.1.5), with this study area extending from the Venture Ridge to the Alma Ridge. The Alma Ridge underlies the southern portions of Parcels 1 and 2, and most of Parcel 3 though this ridge is poorly imaged on existing seismic, especially the 2D.

The Early to Middle Jurassic Mohican Formation is the initial post rift fill in the Scotian Basin composed of fluvial silicilastics and is followed in the Middle and Late Jurassic by fluvial to shallow marine siliciclastics of the Mic Mac Formation and coeval carbonate platform and reef margin carbonates of the Abenaki Formation. The thick Mic Mac section is a significant reservoir for discovered hydrocarbons in the Sable Subbasin, although reservoir quality may be somewhat lower than the overlying Missisauga under Parcels 1 to 3.  Burial depth, shelf edge canyons, salt influence, and lack of well penetrations make it difficult to correlate the Top Jurassic over the study area.

The Missisauga Formation was deposited throughout the Latest Jurassic and Early Cretaceous. This sand-rich sequence of fluvial, deltaic, and shallow marine successions has been divided into upper and lower members separated by an interval of generally thin Hauterivian/Barremian oolitic limestones known as the O Marker (K130). The O Marker is seismically distinctive north of Parcels 1 and 2 but thins distally, falling below seismic limits of resolution in the Eagle area.  A Hauterivian sequence, consistent with the O Marker interpreted to the north, has been carried across the entire study area and continued into deep water (Figure 2.1.6).  This section is highly faulted and eroded by numerous canyon systems in the Chebucto and North Triumph areas.

Upper Missisauga reservoirs in Parcels 1 to 3 may be more prospective where the section becomes more deeply buried. Excellent production from these sands exists at the North Triumph field, with significant discoveries of gas at Glenelg and Chebucto.

The end of the Cretaceous period in the Scotian Basin saw a rise in sea level, basin subsidence and deposition of marine mudstones, marls and chalks of the Wyandot Formation.  The top surface of the Wyandot Formation on seismic profiles corresponds to the K78 marker. This surface shows evidence of widespread mass transport systems that eroded the chalk and moved it down slope towards the basin as described in Smith et al. (2010).  The mass transport scarps and blocks are evident on the NE corner of the Wyandot time structure map (Figure 2.1.7) and one mass transport corridor crosses the western half of Parcel 3.

Wyandot Formation chalks form the reservoir at the Eagle gas discovery in Parcel 1. The polygonal faulting pattern observed at this location (Figure 2.2.2) suggests that this chalk is in-situ and has not been remobilized my mass wasting processes.