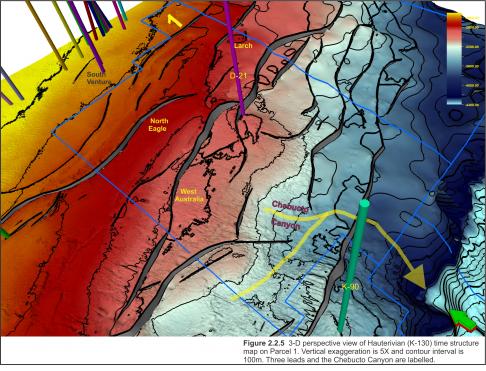 On Parcel 1, in addition to the Eagle reservoir, a number of exploration prospects are observed on the Hauterivian time structure map (Figure 2.2.5). The contour interval of this map is 100 ms and therefore only highlights the structural trends. Two of these prospects, West Australia and North Eagle, have been described by ExxonMobil (2002).

The West Australia prospect has simple closure west of the Eagle field on the same bounding fault. The North Eagle prospect has simple closure along the same fault as South Sable B-44. Both are interpreted to contain a number of stacked sands trapped within simple and fault-dependent closures mapped at several levels within the Logan Canyon and Mississauga formations. Larch is another closure that exists along this fault trend (see Figure 2.2.5). Below the TD of Eagle D-21 the Reliance prospect is another large, high relief, crestally-faulted closure within the Early Cretaceous lower Missisauga Formation, stratigraphically deeper than these other prospects.

The southern extent of Parcel 3 approaches the slope break and is dominated by the Alma Ridge.  The Ridge and associated salt tectonics create complex structures that cannot be accurately delineated on 2D seismic profiles in this area.  Further mapping and depth conversion may define additional leads along these numerous fault trends.