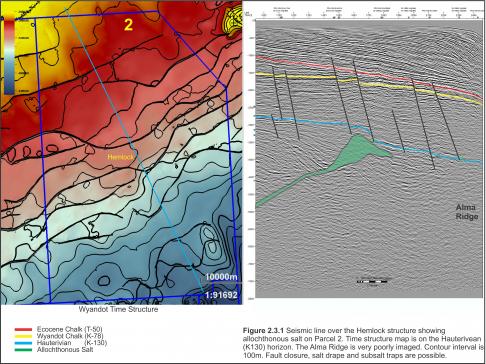 Parcel 2 borders the western boundary of The Gully which is a large post-pleistocene submarine canyon that bisects the shelf and slope just east of Sable Island.  The allochthonous salt bodies in Parcel 2 are poorly imaged on the sparse, vintage 2D seismic data available for this study.  One seismic example through the Hemlock prospect (Figure 2.3.1) shows salt being expelled seawards by prograding Lower Missisauga sands.  The Alma Ridge is present at the south end of this seismic line but is very poorly imaged.  The influx of sediments from the Sable Delta combined with salt extruded over the Alma Ridge resulted in the deposition of a thick, highly faulted Missisauga section in Parcel 2. The density of normal faults and spacing of the seismic profiles make fault correlation challenging across the parcel.